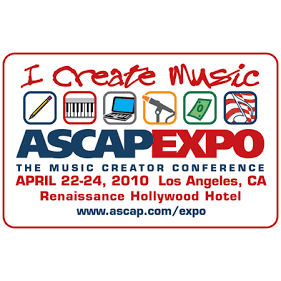 I went to the ASCAP Expo in Hollywood!  I met a number of interesting people, and the sessions were very informative.  I was there mostly to see how viable a career as a singer-songwriter would be and to hear other people’s stories about their experiences in this industry.

Here’s the blow-by-blow of my interpretation of the things I saw and heard.  I apologize in advance if I inadvertently misrepresent anyone’s words or opinions; it’s not intentional.

“Think Outside the Box” presented by David Issac

This was a technical session on how to fine tune your sounds in the studio.  He, being an engineer who has recorded Corinne Bailey Rae and Stevie Wonder, introduced me to a couple of things I was unfamiliar with as a hack home studio engineer.  He prefers to use Logic Pro, btw, as do I.  He emphasized the importance of these things:

This is where Sinbad came in and sat on the floor to listen (!)

Here’s the quick list of the advice David gave:

This was a panel that consisted of Ashley Gorley, Kuk Harrell, Jean-Baptiste, Jane’t A. Sewell-Ulepic and Gregg Wattenberg, all talking about how they write their music, how they got to be where they are now, and so on.

One thing I liked about the panel was that they talked about their families and how they’d found ways to juggle their songwriting career (which for some is a 9-5 job) with their home life.

Regarding the making of “Umbrella” performed by Rhianna, Kuk came into the studio during off hours to mess with Logic Pro in order to learn how to use it.  His collaborators just happened to show up at the studio around the same time, they liked what he was doing, and it all just came together.  They made a demo right there that day that Mark Stewart (Tricky Stewart‘s brother) marketed to every A&R person he knew.  Eventually L.A. Reid made the connection with Rhianna, who recorded it and made it BIG.

Finer points that came from the various songwriters:

I just caught the tail end of this one (the session I originally went to was so-so), but this is what I got from what little I saw:

Highlights from this one:

“How to Outsell a Major Without a Label”

The session started off with notes about Tunecore:

Apparently, we should be encouraged, because there is more music sold now than in any time in history.

Liam, a comedian first, decided to create a music video called “Shoes”.  It went viral on YouTube, and eventually led to selling 2 million copies on Tunecore.  Says he got lucky with the timing and rode the YouTube popularity wave.  He also ended up getting hired by Marshall’s (the clothing retailer) to create a viral video.  Also has been selling t-shirts and other merchandise based on his skits (e.g. a t-shirt with “Betch” written across the front).

Alejandro’s band hit a wall gigging, and decided to change tacks.  Used deliberate strategy that started with a video of them performing a cover song (which is free of royalties on YouTube).  Gained popularity, developed a fan base and periodically released original songs with videos.  Led to 1 million sales on Tunecore.

Mark Isham, jazz musician and film composer, had number of bad experiences with major labels.  Right now if you’re a film composer, you give up copyright and do not collect royalties, but new deals are being made to change that practice.  He’s forming a soundtrack label.

William was formerly a psychologist.  Wrote depressing songs.  Didn’t know much about the music industry, so did a lot of stuff on own, but did intentionally make use of the types of communications that are conducive to building a community.  Managed to get a song on Gray’s Anatomy.  Led to 0.5 million song sales.

“Record and Release Quality Material at Home” with John Jones

When I walked in (a little late), he was playing “Come Undone” by Duran Duran, which he helped to produce.  I think I missed the biggest point he was trying to make, but what I did manage to catch was that today’s home equipment far surpasses what they had in the studio at the time and that what’s most important is the song.  He noted that No Doubt’s first album had horrible production quality, but was popular nonetheless because of the strength of the songs.  This album “Duran Duran”, by Duran Duran, had the cheapest production cost of all the Duran Duran albums (about $100k), but was their biggest seller.

I think the best advice he gave was to train your ear to make the recording sound like what you hear.  In order to do this, he suggested that you stand near the instrument and listen to it.  Then listen to the instrument through the monitors.  If they don’t sound the same (i.e. don’t have the same timbre, etc), then change out the mic, tweak the eq, or whatever until you can get the sounds to match.

It was a pretty entertaining interview (especially the part where he told Erik that he loved him in Lord of the Rings and the part about banging a hot chick).

I didn’t see much of this, but it was cool to see original songwriters performing their popular music.  I especially liked hearing Stephen Bishop sing “On and On” and “Separate Lives” and Natasha Beddngfeld sing “Unwritten” (note: she doesn’t actually play an instrument, but has an amazing voice).