“Quote Cryptograms” is a customizable, touch screen and track ball friendly interactive game where you play the cryptanalyst, decoding mysterious texts to reveal popular quotes.  It included the ability to download up to 800 quotes as well as enter your own quotes to be encoded and shared with others.

This was a game I wrote with a friend to get our feet wet writing Android apps.  Based on the the game “Jungle“:

“The Jungle gameboard represents a jungle terrain with dens, traps “set” around dens,[6] and rivers.[7] Each player controls eight game pieces representing different animals of various rank. Stronger-ranked animals can capture (“eat”) animals of weaker or equal rank. The player who is first to maneuver any one of their pieces into the opponent’s den wins the game.[7] An alternative way to win is to capture all the opponent’s pieces.”

This app was created to help couples bridge the gaps between their “love languages”, as outlined by Gary Chapman in his The 5 Love Languages book, which identifies the following:

The app included activities and assessments to help aid connection. 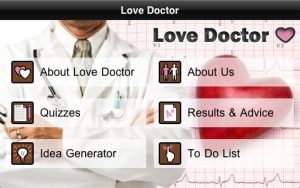